Today I learned a new word—or rather, a new use for an old word—pedestrian. This just happens to be the current photo prompt of the week, and so it has captured my attention for a moment. Prior to inquiring about the prompt, I only knew pedestrian as a noun, “a person who moves about on foot.” But when used as an adjective, this same word means “lacking inspiration or excitement; dull.” Imagine that! Synonyms for pedestrian as an adjective are boring, tedious, monotonous, unremarkable, commonplace, ordinary, run-of-the-mill, plain-vanilla. As you can see, I’m having fun with this. But now it’s time to add some photos. 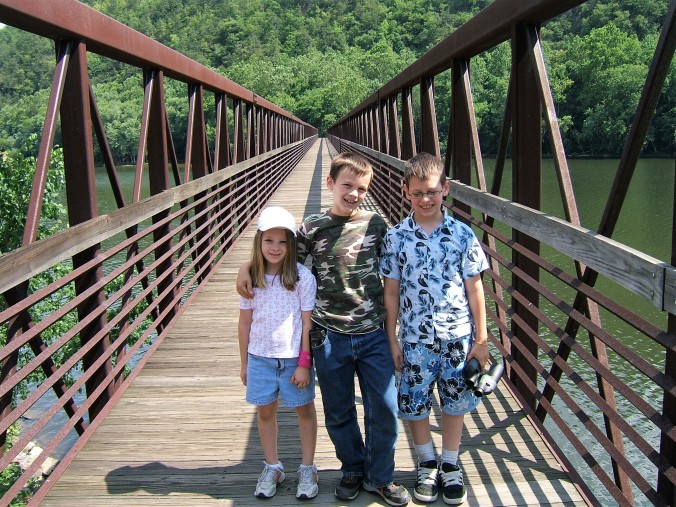 This was this photo that immediately came to mind when I saw the prompt. Back in 2008, my children and I spent four days traveling the Blue Ridge Parkway, staying in primitive campgrounds, hiking trails, stopping at overlooks, and observing God’s creatures big and small. There were certain specific destinations that I had in mind, and the James River Foot Bridge was one of them. This bridge, located in Snowden, Virginia, is a part of the Appalachian Trail, and allows trekkers to cross the James River while avoiding the traffic of US 501. It was built on abandoned train tresses when the train track was rerouted and opened for hikers in 2000. While it is designed for pedestrians, the bridge is actually named after the man who spearheaded its conversion, Appalachian Trail enthusiast Bill Foot. This bridge, and the story behind it, are anything but pedestrian!

In fact, I’ve been hard pressed to think of anything I’ve already photographed that fits the description of dull, boring, and tedious. Perhaps that’s because I’m so easily impressed. I tend to be fascinated by little things and often want to stop the car to take a picture of this, that, or the other thing. So I think I’ll just stick with the noun form of the word pedestrian and show you a few more foot bridges that I’ve seen over the years. 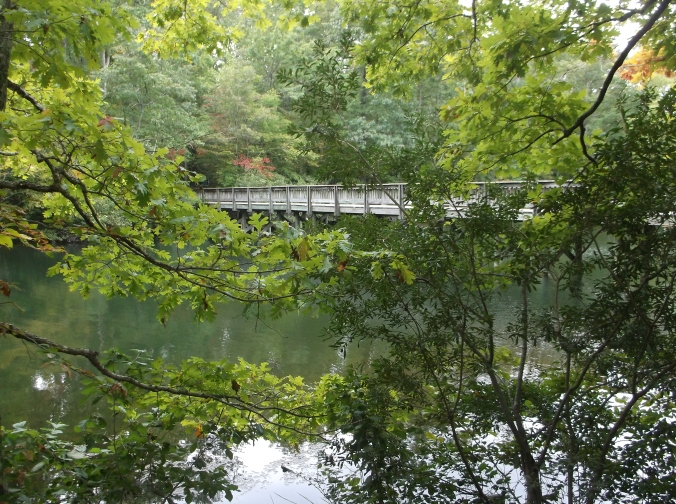 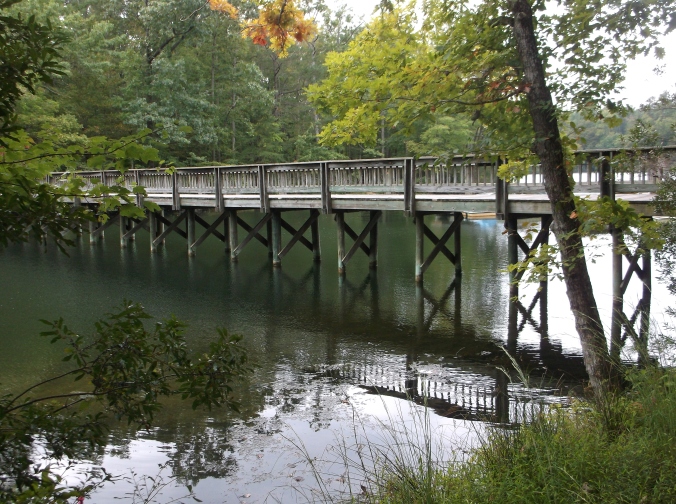 A bridge is a passage from one side to another, crossing a body of water or some other substance that would otherwise be difficult if not impossible to cross. Sometimes there are other ways. You could swim, take a boat, or fly. But none of those options are as convenient as walking across a bridge.

There is another bridge across another chasm. This one is the ONLY way across. I’m talking about the way to heaven, and the bridge is the cross of the Lord Jesus Christ. Jesus said,

If there were any other way to come to God, then He would not have made His Son suffer the shame of the cross. But He did suffer that shame. He came to this earth, lived with us for thirty-three years, then paid the debt of our sins, though He Himself never committed any sin. And three days later He did what no one else ever did—He rose up from the dead of His own power. He is the victor over sin and death. That is how He can offer eternal life to you and me, because He already claimed it!

Then once you have come to the cross and your sins have been forgiven, then God shows you the way that you should go.

I am a pedestrian, slowly traveling through this world on my way to the next, and God directs every step.

Psalm 143:8 Cause me to hear Your loving-kindness in the morning; for in You do I trust: cause me to know the way wherein I should walk; for I lift up my soul unto You.

Jeremiah 6:16 Stand in the ways, and see, and ask for the old paths, where is the good way, and walk in it, and you shall find rest for your souls.

Proverbs 3:5-6 Trust in the LORD with all your heart; and lean not unto your own understanding. In all your ways acknowledge Him, and He shall direct your paths.

O the deep, deep love of Jesus, Vast, unmeasured, boundless, free! Rolling as a mighty ocean In its fullness over me. . Underneath me, all around me Is the current of His love; Leading onward, leading homeward To my glorious rest above. . O the deep, deep love of Jesus, Love of every love the best! 'Tis an ocean vast of blessing, 'Tis the source of peace and rest. . . Introducing "The Current of His Love." This is my first pour, but it will not be my last. I truly enjoyed doing this and adding painted piano pieces to the finished canvas. Well, it's mostly finished. After the glue dries, I'll give it all a couple coats of varnish. . . . #piano #pianoart #pianoartist #pianogifts #pianist #pianodecor #pianolove #pianostudio #musician #musicislife #christianmusician #musicandarts #musicmaker #musicministry #musiclover #pianolife #repurposed #recycledpiano #etsysellers #etsy #iloveetsy #etsyshopowner #etsygifts #etsyhandmade #etsysellersofinstagram #artistsoninstagram #paintpouring #abstractart #acrylicpainting #mixedmediaart
It's brainstorming time again. I've been separating, sorting, and cleaning more piano pieces, and now to decide what to do with them.... . . #piano #pianoart #pianoartist #wip #pianodecor #pianolove #pianostudio #musician #musicislife #musicandarts #musiclover #pianolife #repurposed #recycledpiano #etsysellers #etsy #etsyshopowner #etsyhandmade #etsysellersofinstagram #artistsoninstagram #encoreoldpianos #handmade #makers #usamakers #createdtocreate #handmadebusiness #handmadeshop #mycreativebiz #creativelifehappylife #creativeprocess
This piece shipped to its Forever Home last week. I've made "Middle C" dozens of times. What's special about this one? I'm glad you asked. This one was made from the pieces of two pianos, with genuine ivory keys and exactly 14 pieces. Its purpose is to commemorate a couple's 14th "ivory" anniversary. It is also the last one of its kind that I'll be able to make until I come across another piano bearing ivory keys. . . . #piano #pianoart #pianoartist #pianogifts #pianist #pianolove #musician #letstalkmusic #musicislife #musicteachers #performers #musiclover #repurposed #musicandarts #pianolife #musicmaker #etsysellers #etsy #iloveetsy #etsysellersofinstagram #etsyseller #etsyshopowner #etsyhandmade #etsygifts #floridaartist #miltonartists #14thanniversary #ivoryanniversary #weddinganniversary
Today I tried my hand at black and white, on a black primed canvas. It's also a style I've never tried before. It was fun, though it's far from perfect. I didn't have the brush she used, so I didn't get the same results. . Have you painted in black and white? Did you like it? . . . #paintpracticerepeat #abstractpainting #fantasyart #blackandwhite #acrylicpainting #paintingstudy #youtube #joniyoungart #artistsoninstagram #artistlife #artist #createdtocreate #handmadeart
%d bloggers like this: